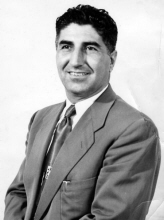 Edward Shukry Shia, 101, a resident of North Haven for 62 years, passed away on Sunday, January 18, 2015. He was the husband of the late Martha Freeman Shia. Born in Zahle, Lebanon on November 6, 1913, he was a son of the late Shukry and Hesney Ghazel Shia. Beloved father of Marcia H. (Ian) Shia, of Washington, D.C., Nancy L. Shia, also of Washington, D.C., Thomas E. (Corinne) Shia, of Reston, VA, and Steven S. (Margo) Shia of San Diego, CA. He is also survived by two sisters, Alice Shia Bundy and Evelyn Shia Riordan, both of Hamden. He was adored 'Jedo' to his grandchildren, Angharad Davies, Michelle Shia, Rhydwyn Davies, Chi Shia, Jill K. Shia, and Ja-Shukry Shia, step-grandchildren Alissa & Kristina Buoni, great-grandchildren, Daniela Sevilla-Shia, Chad Agosto, Jr., Shia Grace Borelli, Iris Eleri Malley, Ava and Vincent Flowers. and many loving nieces and nephews. In addition to his parents and wife, he is predeceased by siblings Anna Adams, William S. Shia, Elizabeth Murray, and Jeanette Shia. Edward graduated from Arnold College as Valedictorian in 1951, and received his Master's Degree from Trinity College in Hartford. He was a proud veteran of the US Navy, serving for five years during WWII. He taught at Eli Whitney School, before working for the State of Connecticut, Department of Education for many years before retiring in 1984. He was a member of Center Church on the Green, and had served as a Deacon, and also a member, and Past Master of Corinthian Lodge #103 A.F & A.M.. He was a member of the Hillhouse High School State Champion Basketball Team of 1933, he received the 100th pilot's license issued in CT, and he enjoyed camping with his family. Funeral service will be on Friday January 23 at 11 AM at Center Church on the Green, 250 Temple St., New Haven. Friends may visit with his family on Thursday from 7-9 PM at BEECHER & BENNETT, 2300 Whitney Ave., Hamden. Interment with Military Honors in North Haven Center Cemetery.