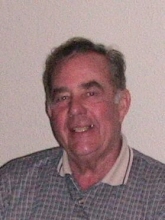 Edward Adolph Sternberg 'Steady' passed away quietly Monday June 1, 2015 in the only place he would have wanted, at his home. Edward was born on July 29, 1934 in North Haven the son of Fred and Muriel Jensen Sternberg. It was there he was raised with his three sisters Dorothy, Lynda and Karen. He graduated North Haven High school and attended both UCONN Storrs and Gateways College in New Haven. He was married to and predeceased by Mary Thim Sternberg of Hamden. He was the father to Craig (Alison) Sternberg of Easton CT, Jeff Sternberg of Rhode Island, Susan (Frank) Quatrella of Harwinton and Sally (Lewis) Socci of Sandy Hook. He was exceptionally proud grandfather to Evan, Warren, Ben, Steven, Brian, Susan, Mary, Jennifer and Joseph. Edward was a US Army Veteran, he worked in the garment district of NY for many years as a purchasing agent working primarily for Best Forms. After his retirement his home in Easton became his 'project'. Although he loved family parties, trips to Aruba, grandson's football and lacrosse games, granddaughters special person's day, watching NFL, NHL, UCONN Girls Basketball he reveled in starting and completing a hard day of work around the house. In his mind there was nothing he couldn't do himself. Our father worked hard and was a strong man of integrity, honor, strength and fortitude not readily present in our world today. Our hope is that through his children, grandchildren, family and friends these values will perpetuate through their good deeds as we all carry forward with all of our 'projects'. Edward is also predeceased by his good friend and Sister Dorothy Chessman June 2013. He also leaves behind his good friends Tom Chessman of North Haven and Beth Loria of Easton. Friends may attend his funeral service on Thursday at 10:30 AM in Beecher & Bennett Funeral Home, 2300 Whitney Ave, Hamden and may also visit with his family prior to his service from 9:00 to 10:30 AM. Interment with Military Honors will follow in All Saints Cemetery, North Haven. Contributions in his memory may be made to The Doug Flutie, Jr. Foundation for Autism, P.O. Box 2157, Framingham, MA 01703 www.flutiefoundation.org