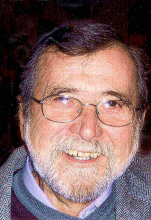 Edward 'Uncle Ed' R. Laudano, Sr, age 73, of Hamden, passed away on June 24, 2012 surrounded by his family at St. Raphael Hospital. Ed was the husband of Marguerite Cricco Laudano; father of Michele D'Errico & her husband Angelo of Cheshire and Edward R. Laudano, Jr & his wife Jean of Wallingford; grandfather of Alexa & Joseph D'Errico and Julia & Edward R, Laudano, III; brother of Frank Laudano of East Haven & the late Salvatore & Andrew Laudano. Born in New Haven on March 6, 1939, he was a son of the late Frank & Julia Mascola Laudano. Ed was a carpenter and heavy equipment operator. His happiest moments were spent in the kitchen cooking and serving delicious meals to all. He was an artist, a wood craftsman and musician. Ed's family would like to thank the 5 North Staff, SICU & Dr. Passarelli & Dr. Henry at St. Raphael's Hospital for the care Ed received in his time of need. His funeral will be held Wednesday, June 27, at 9:15 AM from the BEECHER & BENNETT FUNERAL HOME, 2300 Whitney Ave, Hamden, followed by his Mass of Christian Burial at 10:00 AM in St. Joan of Arc Church. Friends may visit with his family at the funeral home on Tuesday from 4:00 to 8:00 PM. Interment will take place in Centerville Cemetery, Hamden.