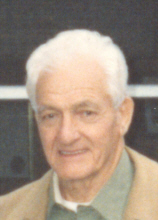 Edward Victor Lipovetz, age 93, of Hamden, passed away April 5, 2010 at Conn. Hospice in Branford. Ed was predeceased in August of 2009 by his beloved wife of 65 years, Nancy Fragola Lipovetz. Born in Chisholm, MN, to the late John & Johanna Pajnich Lipovetz on Nov. 13, 1916, he was raised in Hibbing MN. Ed was predeceased by 6 brothers and 2 sisters, leaving behind several nieces and nephews. He proudly served during WWII in the US Army Air Corp. Ed was a member of the 'Forty-Niners', a 1949 graduate of the Junior College of Commerence, now Quinnipiac University and was a member of it's first hockey team. Ed was a carpenter by trade most of his life, working for the Union of the United Brotherhood of Carpenters. Ed was a longstanding parishioner of St. Rita Church, a passionate gardener, a Yankee's fan and was devoted to the practices of Dr. Robert Atkins and was willing to dispense his knowledge to all who asked. Friends may visit with his family at BEECHER & BENETT FUNERAL HOME, 2300 Whitney Ave, Hamden on Friday April 9th from 9:30 AM to 10:45 AM. His funeral will leave at 11:00 AM for a Mass of Christian Burial celebrated at 11:15 AM in St. Rita Church, 1620 Whitney Ave. Hamden. Interment with Military Honors will follow in St. Mary's Cemetery, Hamden. In lieu of flowers contributions in his memory may be made to Conn. Hospice Inc. - 100 Double Beach Rd, Branford, CT 06405.