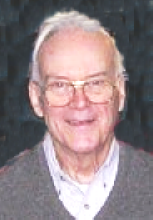 Edward William Welch, 87, passed away peacefully at his home in Hamden on April 17, 2017. Born in West Haven on August 25, 1929 to the late Edward and Elizabeth Doody Welch. He was predeceased by his wife Patricia 'Nancy' (Hayes) Welch. Edward is survived by his sons and daughters-in-law, Edward & Betsy of Hamden, Steven & Andrea of Madison, WI and James & Sharon of Hamden; grandsons, Christopher, Gregory, David, and Alex Welch; sister in-law Barbara Giglio; brother in-law John Haynes & his wife Linda, and longtime friend Caroline Tallberg. He was predeceased by his infant son, William Welch, his sister Barbara Walker, and brother James Welch. Edward was a US Army Veteran and a director of manufacturing at Winchester Repeating Arms before his retirement. He was a former member of the Elks Club, he coached youth baseball for years, and enjoyed skeet shooting. He traveled to Europe and throughout the U.S. over the years with his wife and always enjoyed time at the craps tables at Foxwoods Casino. Ed's family would like to thank his caregivers, Lois Maselli Votto, for all her loving care, Mr. B, from Franciscan Hospice, for his care in Ed's time of need, and the Clelian Adult Center for all their compassion and services Ed received while in their care. Ed will always be remembered as a strong and caring husband, father, and grandfather. Friends may visit with his family on Friday, April 21st from 4:00 to 7:00 p.m. at BEECHER & BENNETT FUNERAL HOME, 2300 Whitney Ave, Hamden and may attend his Funeral Service Celebrating Edward's life at 10:00 a.m. on Saturday, April 22nd at the funeral home. Burial with Military Honors will follow in St. Lawrence Cemetery. Contributions in Ed's memory may be made to the Clelian Adult Day Center, 261 Benham St., Hamden, CT 06514.