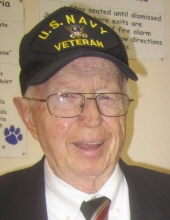 Edward Gilman Williams, 93, of Hamden, husband of the late Barbara Thompson (Russell) Williams, passed away on October 22, 2019 at Benchmark Senior Living at Hamden. He was born in Ware, MA on April 11, 1926 to the late Carl Emmons and Susan Helen (Gilman) Williams. He leaves his son Thomas Clarke Williams and his wife Linda of New Canaan, daughter Susan Williams of MD, and grandsons Thomas Holbrook Williams and Robert Thompson Russell Williams. After graduating from Lenox School in 1944, Ned joined and honorably served in the U.S. Navy receiving the WWII Victory Medal, and campaign medals for the American Theater, Asia Pacific, and Philippine Liberation. He earned his B.A. in Economics and History from Trinity College in Hartford. Ned started his banking career at Union & New Haven Trust Company in the Income Tax Department in 1951. From 1972 to his retirement in 1989 he served as Executive Vice President and Vice President of Northeast Bancorp, Inc. He enthusiastically served the Greater New Haven Community on many boards including Easter Seals Goodwill, Edgerton Park Conservancy, Whitney Center, the English-Speaking Union, the Shubert Performing Arts Center, New Haven Colony Historical Society Board, and Church of the Redeemer, Trustee and Deacon. He served on the New Haven Lawn Club's Board, and as President. An avid traveler, Ned made every opportunity to travel with his family on vacations, adventures to Great Britain, and dozens of trips to see the beauty of America. He never missed opening day in April for trout season, took his son Tom on every fishing trip possible, and enjoyed meeting new people at every turn. A graveside service at Evergreen Cemetery,769 Ella T. Grasso Blvd. New Haven with full Military Honors will be held at 10:30 a.m., Saturday November 9, 2019. Friends are invited to meet at the cemetery office at 10:15am. Beecher & Bennett Funeral Home, Hamden is in care of arrangements. Memorial Contributions in Ned's name may be made to the Boy Scouts of America, Troop 70, C/O St. Mark's Episcopal Church, 111 Oenoke Ridge, New Canaan, CT 06840.