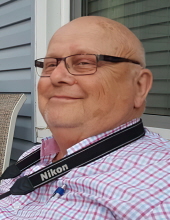 Edwin Franklyn Dingus, age 74, of Hamden, passed away May 13, 2020. Born in Greensboro, North Carolina he was a son of the late Edwin J. Dingus & Jenny (Lind) Dingus. Ed is survived by his greatest love, wife N. Yvonne (Purdee) Dingus; his son Edwin Jerome Dingus & wife Michele of Hamden; his daughter Betty Dingus Heath of Green, Ohio & grandchildren David Michael, Brittney Yvonne & Jacob Earl Heath; siblings Robert Dingus, Nancy Chancey, Raymond & Gary Dingus and Pamela Tracy; and a host of nieces & nephews. Ed was predeceased by siblings, David, Gregory, Frances & Karen Dingus, Barbara Burckes and Rosemary Allen. Ed was a resident of Hamden since 1999, prior to that he lived many years in Branford. He was retired from the Sandvik Company after 25 plus years. Ed loved to take photos of birds, butterflies, any part of nature; he was an avid Yankee fan; He was always his children’s and grandchildren’s biggest fan. He was a 33rd Degree Scottish Rite Mason, a former Grand Commander of the Knights Templar of CT and was twice the Master of Widow’s Son Lodge No. 66.
A Memorial Service for Ed will take place in the future when everyone can once again gather together. Arrangements are in care of BEECHER & BENNETT FUNERAL HOME. Memorial contributions in honor of Ed may be made to the Masonic Charity Foundation, 74 Cheshire Rd, Wallingford, CT 06492.