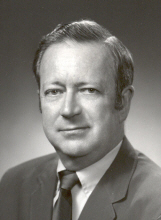 Edwin John Abeling, age 96, passed away on August 20, 2012 in Connecticut Hospice in Branford. Edwin was the husband of the late Polly May Eldridge Abeling. Born in Amsterdam, NY on October 4, 1915, he was a son of the late John & Esther Auty Abeling and brother of the late Wesley & Donald Abeling & Eileen Lincoln. Edwin is survived by his sons Michael Abeling & his wife Patricia of Venice, FL, J. Steven Abeling & his wife Cindy of Woodbridge and Jeffrey Abeling & his wife Teresa of North Haven; granddaughters Kristina Pitts of Pacifica, CA, Alyssa Catherine Abeling of North Haven & Elizabeth Claire Abeling of Pittsburgh, PA; step-grandsons, Blake Grey & Timothy Blum; great grandchildren Michael & Maxwell Pitts; sister Ruth Blatchford of Amsterdam, NY; brother Francis Abeling of the Villages, FL and several nieces & nephews. He was a graduate of the University of Kentucky & Columbia University Graduate School of Business & attended Mass Institute of Technology for Special Training in Food Technology. Edwin was employed 20 years as Director of Research & Development with Beech-Nut Life Savers in Canajoharie, NY & San Jose, CA and 20 years with Peter Paul Inc. and later Peter Paul Cadbury as Vice President of Research & Development in Naugatuck, CT. He lectured at Rensellear Polytechnical Institute and at Yale University in the Department of Botany as well as before many organizations in the Scientific Community. He was co-author of a textbook 'The Chemistry and Technology of Cereals as Food and Feed'. He has written and published numerous scientific articles in his field in various trade journals and magazines. Edwin was a member of The Institute of Food Technology, The Food and Drug Law Institute in Washington DC and a member of the Woodbridge Club and served on its board of directors. After retiring in 1981 he was a consultant for several years concentrating on food and drug regulations affecting the food industry. In his later years he took up water color painting which were exhibited in galleries locally and in Florida. He was a parishioner for many years of Bethesda Lutheran Church in New Haven. His funeral service will be held Friday August 31, 2012 at 10:00 AM in the Bethesda Lutheran Church, 305 St. Ronan St, New Haven, followed by his burial at East Side Cemetery, Woodbridge. Friends may also visit with his family on Thursday August 30th from 6:00 to 8:00 PM at BEECHER & BENNETT FUNERAL HOME, 2300 Whitney Ave Hamden, CT. Contributions in Edwin's memory may be made to Bethesda Lutheran Church, 305 St. Ronan Street, New Haven, CT 06511 or to Connecticut Hospice Inc, 100 Double Beach Road, Branford, CT 06405