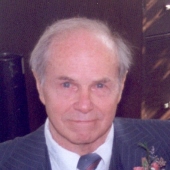 Edwin P. Hemingway, 87, husband of the late Bernice Skinner Hemingway, passed away on October 13, 2011 at the CT Hospice. Born on September 19, 1924 to the late Thornton and Gladys Pendleton Hemingway, Sr. Edwin leaves his two children from his first wife, Robert Hemingway of Milford and Anne Hemingway of Orange; one grandchild and many nieces and nephews, also survived by his first wife Tina Hemingway of Orange. Predeceased by siblings, Thornton Hemingway, Jr, Pendleton Hemingway, Deborah Harper, and Ellen Nordin. Edwin is a graduate of Commercial High School class of '43. After graduating, he joined the Marines and received a Purple Heart after being wounded at Consolidation of the Northern Solomons. Once he left the service, Edwin went on to graduate from the University of New Haven class of '52. He worked at United Nuclear Corp. for 25 years as a Senior Planner. After his retirement, he became a Certified Nurses Aid and worked at Branford Hills as the director of recreation before working at Clinton Health Care. He is a former active member of the Living Word Ministries Church in West Haven and most recently a member of Joy Outreach Fellowship Church in Brevard, NC. He was involved with the American Legion Post 88 in Brevard where he lived for 21 years and had been a volunteer at the local hospice along with other nursing facilities. A Funeral Service will be held on Tuesday, October 18th at 10:30 a.m. at BEECHER & BENNETT- TAYLOR FUNERAL HOME, 410 Campbell Ave., West Haven. Friends may visit with the family prior to the service from 9:30 to 10:30 a.m. Burial with Full Military Honors will follow at Seymour Union Cemetery. Contributions in Edwin's memory may be sent to the charity of one's choice.