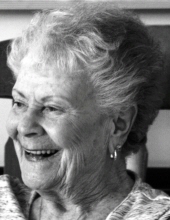 On Wednesday, August 28, 2019, Eileen M. Smith Butler passed away peacefully at her home in Hamden, at the age of 90, while surrounded by loved ones. Born on December 28, 1928 in New Haven to the late Matthew 'Poppy' and Marie 'Nanny' Smith. Eileen was the youngest of four siblings, all of whom predeceased her; Anne Hertz, Kathy Keyes, and Mary Tucker. She was the mother of James (Lori Beaudoin) Butler, Mary (Stephen) Guzowski, Doreen Butler, Matthew (Rose) Butler, and the late Ruth (Philip) Goodloe. Also survived by six grandchildren, Stephanie Giacco, Melissa Marino, Brandon, Nicholas, Justin, and Aiden Butler; and one great-grandson, Joseph Giacco. Eileen received her high school diploma from the former New Haven Commercial High School on June 11, 1946 and held various clerical positions at banking and insurance institutions, but was best known for being 'Mimi' - an amazing mother, grandmother, homemaker, and child of God. Mimi's greatest passion was her love for God and her family. She was an incredibly compassionate human being who always put the needs and interests of others before her own. Known also for her quick wit and humor, Mimi was a big fan of the New York Yankees, but only when they 'behaved.' A gathering of family and friends will take place on Thursday, September 5th from 8:00 to 9:30 a.m. at BEECHER & BENNETT, 2300 Whitney Ave, Hamden. A Memorial Mass will be celebrated at 10 a.m. in Our Lady of Mount Carmel Church, 2819 Whitney Ave., followed by her interment in All Saints Cemetery. In lieu of flowers, donations may be made in memory of Eileen Butler to EWTN Global Catholic Network, 5817 Old Leeds Road, Irondale, AL 35210 or by telephone at 1-800-447-3986.