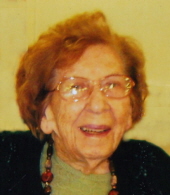 ? Eileen McLenney Pfnausch, 93, of Hamden, beloved wife of the late Francis Pfnausch, passed away on August 16, 2013 in Grimes Center/Yale New Haven Health. Eileen was born on June 3, 1920 in Lowell, MA, and was a daughter of the late William H. and Catherine (Fitzgerald) McLenney. She was a resident of Hamden since 1943 and retired in 1986 as Deputy Tax Collector of the Town of Hamden. She was a long time member of Blessed Sacrament Church and in more recent years was a member of St. Rita Church. She was a member of Our Lady's League of Blessed Sacrament Church, Hamden Women's Club, Hamden Promenaders Square Dance Club and Hamden Painting Group. Eileen will be lovingly missed and fondly remembered by her daughter, Susan Pannella of Branford and her two grandchildren; Lea Pannella and her husband Michael Palumbo of West Hartford and Angelo J. Pannella III and his partner Michele Gay of New Haven. She also leaves behind her brothers-in-law Dan Pfnausch (and his partner Dolores Blanks) and T. Ronald Pfnausch (and his wife Barbara), along with numerous nieces and nephews. She was predeceased by her sister, Marjorie McLenney Ogburn, of Yucaipa, California. The family would like to thank the staff of Grimes Center and Connecticut Hospice for the exceptional care they provided to Eileen and the generous support they provided to the family over these past few years. Funeral from BEECHER & BENNETT FUNERAL HOME, 2300 Whitney Ave, Hamden on Monday, August 19, at 10:00 AM followed by her Mass of Christian Burial celebrated at 10:30 AM in St. Rita Church, 1620 Whitney Ave, Hamden. Burial will follow at St. Mary's Cemetery in Hamden. In lieu of flowers, memorial contributions may be made to Connecticut Hospice, 100 Double Beach Road, Branford, CT 06405.