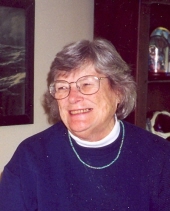 Elaine T. Hamilton died peacefully Wednesday, April 21, 2010 at home with her loving family by her side. Elaine was born in Meriden August 10, 1933 and lived here all of her life. She was the daughter of the late Norman and Dorothy Duke Tisdall. She was predeceased by her husband, Mark L. Hamilton. She graduated from Meriden High School in 1951 and maintained an active roll in planning the reunions for her class. She enjoyed following UCONN Girls Basketball, and was a life-long Red Sox fan. Her quick wit and wry sense of humor always brought a smile to those who knew her. She displayed her compassionate and giving nature through her love of animals. For many years she was involved with Merry Mates, and portrayed characters in such plays as Grammercy Ghost, Arsenic & Old Lace & Dear Delinquent. She was active in Charity Club, College Club, Girls Club, and Camp Claire. She was also a member of the Appalachian Mountain Club, and spent two special weeks each summer on AMC's 3-Mile Island in New Hampshire with her husband and friends. Of all Elaine's clubs, the most dear to her was the Bridge Club, a group of very special ladies and life-long friends. The sisterhood will never be the same. Most of all, she cherished her family. Elaine is survived by her children: Shelley Hamilton Mack and her husband Thomas of Essex, Jean Hamilton Welch and her husband Robert of Vail, AZ, her son Mark L. Hamilton, Jr. and his wife Meg of Meriden, and her two beautiful grandchildren Mackenzie J. Hamilton, and Mckayla L. Hamilton. Funeral Service at 10:00 a.m. on Monday, April 26th at The First Congregational Church, 62 Colony St., Meriden. The Rev. John Clarke will officiate. A reception in Smith Hall will immediately follow. Burial will be private. In lieu of flowers, donations may be sent to Camp Claire's Beautification Fund in Elaine's name, P.O. Box 702, Old Lyme, CT 06371. Services under the direction of BEECHER & BENNETT-FLATOW FUNERAL HOME, 48 Cook Ave., Meriden.