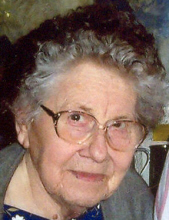 Eleanor Agnes Schulze Warner, 92, of Shepard Ave. Hamden passed away July 31, 2008. She was the widow of Alvin 'Jim' Lewis Warner, Jr. Mother of Lauren (Mark) Warner-Bojarski of Hamden, Ronald A. (Karen) Warner of Norwich and Hamden and the late Alvin L. Warner, III, mother-in-law of Suzane Warner of Baldwin, MD., grandmother of Amy Warner and Whitney Warner-Rohde and Mark and Michelle Bojarski. Mrs. Warner was born in New Haven December 26, 1915, daughter of the late Albert O. and Mary Currie Schulze. She was the owner of Schulze Farm in Hamden, the Wolcott Falls Antique Store and was a medical office professional for the late Dr. Weiner formerly of New Haven. Mrs. Warner was a former member of the Quoata Club in Hamden and the 4H Club. Eleanor's family would like to thank the entire staff at Hamden Health Care Center for the care and compassion she received while a resident of their facility. Funeral Service will be held at BEECHER & BENNETT, 2300 Whitney Ave., Hamden. on Saturday August 16, 2008 at 10AM. Friends may visit with the family at the funeral home on Saturday from 9 to 10 AM. Interment will follow in Beaverdale Memorial Park, Hamden. Contributions in her memory may be made to the Dunbar United Church of Christ, 767 Benham St., Hamden, CT. 06514.