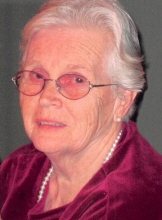 Eleanor C. Zacarelli, 87, of Hamden, passed away peacefully at the St. Raphael's Campus of Yale New Haven Hospital on July 7, 2016. She was the beloved wife of Nicholas J. Zacarelli. Daughter of the late Adolph and Ruby Anderson Werme, Eleanor was born in Worcester, MA on June 6, 1929. She grew up in Spencer, MA before moving to Connecticut and graduating from East Haven High School. She was always very active and had a very creative mind. Eleanor took music lessons as she got older and played the organ with her husband. She loved to paint, especially with oils and was known for her amazing portraits. She could often be found crocheting or knitting and enjoyed arts and crafts. Raising her children and being with her family was most important to Eleanor. Along with her husband, Eleanor is survived by her sons, Derry Zacarelli and his wife Deborah, Glenn Zacarelli and his wife Mary Anne, Terry Zacarelli, and Craig Zacarelli and his wife Christine; daughter, Robin Petrillo; grandchildren, Jesse and Christopher Petrillo, and Vincent, Jason, Ashlyn, Nicholas and Benjamin Zacarelli; and several nieces and nephews. She is also survived by her brother Carl Werme and half brother Stephen Poirier; step brothers Bobby and Willie and step sister Carol. She was predeceased by her brother Lonnie Werme; sister June Dececchi; and step sister Joan. Relatives and friends are invited to visit with Eleanor's family on Monday, July 11, 2016 from 4:00 p.m. to 8:00 p.m. at BEECHER & BENNETT FUNERAL HOME, 2300 Whitney Ave., Hamden. All are invited to attend Eleanor's funeral service on Tuesday, July 12, 2016 at 10:00 a.m. in the funeral home. Burial will follow in Beaverdale Memorial Park, New Haven. Memorial contributions in Eleanor's name may be made to the Alzheimer's Association, Connecticut Chapter, 200 Executive Blvd, Suite 4B, Southington, CT 06489 or online at www.alz.org. To share a memory with her family, please visit us at www.beecherandbennett.com.