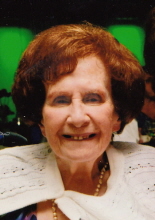 Eleanor C. Howe, wife of the late David W. Howe, Jr., of Cumpstone Dr, Hamden passed away Saturday March 15, 2014 after a brief illness. She was born in New Haven Sept. 29, 1931, a daughter of the late George A. Conley of Hamden and Blanche Seaman Conley of New Haven, and was a lifelong Hamden resident. She was employed as a court reporter for the Sanders, Gale & Russell Firm and later was employed with Dale Guard Security Systems. She was an active member of the Tuesday Night Card Club for over 25 years. She is survived by her loving children, Donna (Jon) Dzubak of Cheshire, Cathy Planeta of Hamden, Lori (Joe) Rusconi of Northford, and David W. Howe, III and his companion Meg Gillin. She was the grandmother of Lisa (Steven) Lavorgna, Kevin (Victoria) Sullivan, and Brian (Linda) Planeta, great-grandmother of Gabriella Lavorgna and Zachary Planeta, and sister-in-law of Roberta Conley of CO. She was predeceased by a brother, George A. Conley. Eleanor is also survived by her adored pet Bassett Hound, Munson. Funeral service will be held Tuesday morning March 18, at 11 am in the Mount Carmel Congregational Church, 3284 Whitney Ave. Hamden. Interment in Centerville Cemetery. Arrangements in care of BEECHER & BENNETT, 2300 WHITNEY AVE. HAMDEN. In lieu of flowers contributions in her memory may be sent to NEBHR,www.bassethoundrescue.com/newhampshire.htm, P.O. Box 84 Newfields, NH 03856.