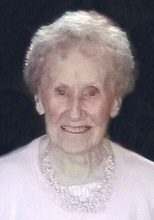 Eleanor Marie (Hastings) O’Connor, 93, passed away peacefully at home in Hamden Friday, July 7, 2017 after a brief illness, surrounded by her loving family. Eleanor was predeceased by her beloved husband, Edward, who died in 2004. She was born on April 13, 1924 in Clinton, MA, a daughter of John and Eva (Rouleau) Hastings. Eleanor lived in Clinton until age six, when her family moved to Milford, MA before settling in Natick, MA, where she would meet her future husband when both were in their teens. Eleanor graduated from Natick High School in 1941, then worked at the Natick Rationing Board during World War II and later as an assistant for the town’s popular family practitioner, Dr. Harold Cohen. Edward matriculated at Boston College, before interrupting his studies to enlist in the Army Air Corps. They married in 1947 and Ed returned to BC, graduating in 1950, just a few months after their first child, Susan, was born. The young family moved from the Boston area to Pennsauken, N.J. as Ed began his career with the Federal Bureau of Investigation. When he was later transferred to the FBI’s Field Office in Washington, D.C., they lived in Cheverly and Wheaton, MD. The couple and their growing family moved to Connecticut in 1963, purchasing a home in the Spring Glen neighborhood of Hamden, where Eleanor would live the rest of her life among her family and many dear friends. As a devout Catholic, Eleanor was a communicant at St. Rita Church in Hamden for more than a half-century. She was active at St. Rita School and the parish community, including volunteering in the Infant Room of St. Rita Daycare after Ed’s death. She loved her time with the High Lane Club and the Sleeping Giant Women’s Golf Association, and was a charter member of the “Vermont Club,” a group of women friends who gathered weekly to enjoy coffee, pastries, and most of all, one another’s company. As her children passed through St. Rita School and the Hamden school system, their young pals became their mother’s friends as well, and they would often visit Eleanor as they grew into adulthood and raised their own families. In addition to Susan (William Forte), Eleanor is survived by six other children: Michael (Jacqueline) of Hull, MA, Anne Soybel (Laurence) of Stafford, VA, Ellen of Hamden, Dennis (Sharon) of Hamden, John (Donna) of Stratford, and Timothy (Melissa) of North Madison. She was predeceased by a daughter, Patricia Ann, in 1956. Eleanor was also predeceased by her brother, Paul Hastings and her sister, Natalie (Hastings) Hall. Grandchildren include Geoffrey and Michael (Erin) Soybel; Kevin, Cameron, and Cassidy O’Connor; and Caroline and Sydney O’Connor. Eleanor was predeceased by granddaughter Krisanne (Forte) Barbara in 2007. She is also survived by great-grandson Andrew Barbara and grandson-in-law Luciano Barbara. Eleanor’s funeral services will be held on Tuesday, July 11, 2017 at 9:00 AM at Beecher & Bennett Funeral Home, 2300 Whitney Ave., Hamden. Mass of Christian Burial will be celebrated at 10:00 AM in St. Rita Church, 1620 Whitney Ave., Hamden. Interment next to her husband to take place in St. Patrick’s Cemetery, Natick, MA at 2:00 PM. Relatives and friends are invited to visit with Eleanor’s family on Monday, July 10 from 5:00-8:00 PM in the funeral home.