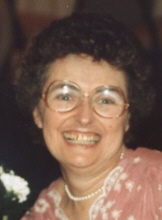 Eleanor Quirk Uihlein, 79, of Benedict Drive, North Haven passed away peacefully at her home on January 12, 2012. She was the daughter of the late Joseph Thomas and Sarah Elizabeth Schultz Quirk and beloved wife of the late Frederick Hau Uihlein, Sr. She was born on January 3, 1933 in New Haven. Eleanor attended St. John the Baptist School and graduated from Hillhouse High School. After high school, she worked at United Illuminating (UI) where she met her husband, Fred. During their 49 years of marriage, they raised six children, enjoyed traveling and spending their summers at Mansfield Grove in East Haven. She was a devout Catholic who was active in the community and had a kind, caring and giving heart, helping many people. Upon retiring, she spent her time with her devoted husband, who she now joins in heaven. She is survived by her brother, Joseph Thomas Quirk (Joan) of New Haven; six children, Mark Uihlein of Seattle, WA, Kurt Uihlein and his wife Lisa of Killingworth, Mary Cruz and her husband Andres of North Haven, Kathy Berera and her husband Jon of Torrington, Ellen Hurlburt and her husband Ron of Clinton and Frederick Uihlein Jr. and his wife Kerianne of Hamden; her ten grandchildren, Jennifer Acquino, Andrea Markavich, Brian & Christopher Dube, Michael, Ben & Nick Uihlein, Megan Cruz, Joshua & Lyssa Hurlburt; and her five great-grandchildren, Felicia & Michael Acquino, Jr., Kaylee & Lilyana Markavich and Jonathan Lanzetti-Uihlein; along with many nieces and nephews. Her children would like to thank all those who helped care for her, particularly her good friends, Jim Broker and Libby Wamser, her caregiver of several years, Edith Kubuafor and Hospice Home Care. Funeral from BEECHER & BENNETT, 2300 Whitney Ave., Hamden on Tuesday, January 17th at 9:15 A.M. followed by a Mass of Christian Burial in St. John the Baptist Church, New Haven, at 10:00 A.M. Interment in Beaverdale Memorial Park. Friends may visit with her family on Monday evening from 4 to 7:00 P.M. at the funeral home. In lieu of flowers, contributions in Eleanor's memory may be sent to CT Hospice, 100 Double Beach Rd, Branford, CT 06405 or the National Multiple Sclerosis Society, Connecticut Chapter, 659 Tower Ave 1st floor, Hartford, CT 06112.