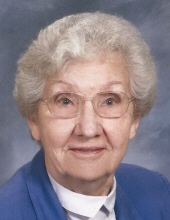 Elise A. Horsfall, age 90, of East Haven, CT, formerly of Buckfield, ME, passed away on March 17, 2018 at Connecticut Hospice in Branford, CT. Born in Pella, Iowa on June 20, 1927, she was a daughter of the late John Buitenwerf and Hattie (Maassen) Buitenwerf. Elise grew up in Pella, Iowa. After graduating from college, she and her husband, the late Frederick Horsfall, Jr., lived in Glendale, CA. The couple later moved to Red Bank, NJ, where they resided for most of their lives. Elise was a Physical Education teacher in Middletown, NJ for many years before her retirement, after which she moved to Buckfield, Maine to live with her son and daughter in-law. She lived her last 2 years with her daughter in East Haven, CT. Elise is survived by her daughter Rachelle Goto and her son Fred & his wife Penny Horsfall; her grandchildren Sara Goto, Adam Goto & his wife Meaghan, Christopher DeMelia & his wife Cary and Melissa Ayres; her great-grandchildren Teigan Gorman-Goto, Parker DeMelia, Autumn DeMelia, Austin Ayres, Abbigale Ayres and Mackenzie Cole, and several nieces & nephews. Elise was predeceased by her sister and brother, and great-granddaughter Alexis Ayres. Private entombment will take place in Buckfield-Damon Cemetery, Buckfield, Maine. Friends are invited to attend her Memorial Service on Saturday, March 24th, at 2:00 PM at Bethesda Lutheran Church, 305 St. Ronan St, New Haven, CT. In lieu of flowers, donations may be made in support of Rett Syndrome research at rettsyndrome.org. Arrangements are in care of Beecher & Bennett Funeral Home, 2300 Whitney Ave., Hamden, CT.