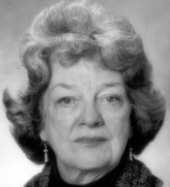 Elizabeth ('Betty') Bushnell Kubler, known as a 'patron saint of the arts' in New Haven, died on January 9, 2009 at the age of 96, following a recent stroke. Born in New Haven on April 22, 1912 to Winthrop Grant Bushnell and Harriet Scofield, Betty was educated at The Day School, Smith College ('33), Fountainbleau, and the Yale Art School. Married to the late Professor George A. Kubler, Sterling Professor of Art History at Yale University and author of The Shape of Time, Betty became a passionate supporter and sustainer of the arts in New Haven. She was one of the founders of The Long Wharf Theater in 1964, and after over forty years as patron, gala organizer, and writer of a multitude of 'angel letters,' she continued to be addressed by the Long Wharf staff as 'Mother Kubler,' attending Long Wharf Theater productions well into 2008. In her 80's, Betty remarked, 'I think that theater is one of the greatest teaching and humanizing instruments in the civilized world.' Also in 1964, Betty participated in the founding of the Arts Council of Greater New Haven, which established the Audubon Street Arts Center. Besides her ongoing volunteer work and support for both the New Haven Symphony and the Neighborhood Music School, Betty was particularly proud of being on the formative board of City Spirit Artists, an organization that helps artists display their work around New Haven and do work within New Haven prisons. As an artist in her own right, Betty was often asked to display her colorful paintings at art shows throughout the city. Betty received many forms of recognition for her work with New Haven art organizations, beginning with an award from the early Arts Council before 1950, through to The Newt Schenck Award for Life Time Achievement in 1999. In 1996, Betty was given the keys to the City of New Haven. Elizabeth is survived by four children: Alexandra, Cornelia, Elena, and Edward; six grandchildren and five great-grandchildren. An informal gathering to celebrate Betty's life will be held at Whitney Center on February 12th at 2:30 in the afternoon (Snow date February 13). A burial ceremony for family members will take place at Evergreen Cemetery in the spring. It was Betty's wish that any memorial contributions be made to The Long Wharf Theater Fund at The Community Foundation of Greater New Haven, 70 Audubon St., New Haven, CT 06510-9755. BEECHER & BENNETT, 2300 Whitney Ave., Hamden in care of arrangements.