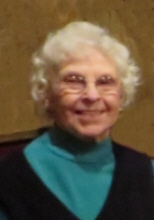 Elizabeth M. Nelson, 90, a resident of Woodbridge for the past 58 years, passed away at Connecticut Hospice on Saturday, February 14, 2015. Born on May 28, 1924 to the late Konstanty and Josephine March. She was the wife of the late Burton E. Nelson. She is survived by a son, Wayne B. Nelson, and a brother, Walter March, both of Seymour. Predeceased by her son, Robert A. Nelson, her sister, Helen Wascowicz, and her parents. She had worked as a Teacher's Aid in the Amity School System for many years. Funeral arrangements will be private and in care of BEECHER & BENNETT, 2300 Whitney Ave., Hamden. Contributions in Elizabeth's memory may be sent to the American Lung Association, 55 W. Wacker Dr., Suite 1150, Chicago, IL 60601, or given online at www.lung.org/donate.