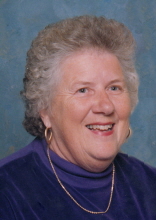 Elizabeth M. Slauson, age 89, of Bethany, formerly of Hamden, passed away on August 23, 2014. Born in Hartford, CT on February 24, 1925, she was a daughter of the late James Burleigh Morton & Helen Chatfield Morton. Elizabeth was the widow of Harvey Benson Slauson, Jr; mother of Suzanne Carpenter & her husband Frank of Virginia Beach, Harvey Slauson, III and Robert Slausen & his wife Ona-May all of Bethany; grandmother of Adam & Drew Carpenter, Robert Slauson, Jr, Cassandra & Odessa Slauson and sister of the late Louise Bangs, Stella Bisaccia & George A. Morton. Elizabeth was a former saleswoman for Caldor's Department Store in Hamden. She was a member & past president of the Hamden Women's Club and a former member of the Daughters of the American Revolution. Her funeral service will be held Thursday, August 28th at 10:30 AM in BEECHER & BENNETT FUNERAL HOME, 2300 Whitney Ave, Hamden. Friends may also visit with her family at the funeral home on Thursday from 9:30 to 10:30 prior to her service. Interment will follow in Centerville Cemetery, Hamden. Contributions in her memory may be made to the American Cancer Society, 38 Richards Ave, Norwalk, CT 06854.