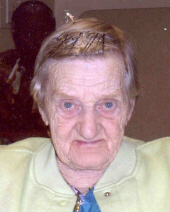 Elizabeth Ruth Tretiak, 92, of West Haven passed away on Tuesday, March 29th at The CT Hospice in Branford. Wife of the late Earl A. Thatcher and the late Anthony Tretiak, Elizabeth is survived by daughters Mary Northrup of East Haven and Elizabeth Barrows of West Haven; sons Earle R. Thatcher of West Haven and William Thatcher of Chatham, MA; seventeen grandchildren, thirty-four great-grandchildren and four great-great-grandchildren. In addition to her husbands, she was predeceased by sisters Gertrude Krebs and Florence Hanson and a grandson, Frank Northrup. A daughter of the late William L. and Ruth Mason Hanson, Elizabeth was born in West Haven on September 5, 1918. She had been employed by Star Drug Company for 20 years, SNET for 8 years and she was a salad bar assistant at Stop & Shop in Orange. Friends may visit with the family on Thursday, March 31, 2011 from 4-8 PM and Friday, April 1, 2011 from 10 - 11 AM at BEECHER & BENNETT-TAYLOR, 410 Campbell Ave., West Haven. A Funeral Service will follow at 11 AM in the funeral home. Contributions in Elizabeth's name can be made to CT Hospice, 100 Double Beach Rd., Branford, CT 06405.