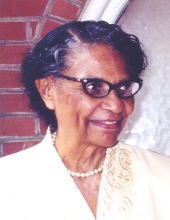 The family of Elizabeth Ezell Walker bid her farewell on March 12, 2019 at the age of 102. Elizabeth was the wife of Cesar C. Walker for 54 years. She was born in Tuskegee, AL on August 3, 1916, daughter of the late Levi and Carrie Slaughter Ezell. She came to Connecticut with her sister in 1942, working for the Eggleston family and later, for the Wilcoxes. She married, and ultimately became the grand dame of six generations. Elizabeth is survived by her daughters Betty Grimes, Carol Walker, and Liz Walker; and her sister Mable Stroud. She was predeceased by her son Cesar Walker, Jr.; brothers Dennis, Levi, and Rufus Ezell along with Annie Pearl Pollard, Minnie Mae Reed, Louester Stroud, Lois Tatum, Thelma Jordan, and Willietta Green. Elizabeth attributed her long life to God's grace. She walked with Him for over 80 years and He never failed her up to the last moment with her daughter by her side. Proverbs 31:10,28 - 'Who can find a virtuous wife? Her children rise up and call her blessed.' Relatives and friends are invited to a funeral service celebrating Elizabeth's life on Saturday, March 16 at 10:00AM at the First Assembly of God Church, 601 Paddock Ave., Meriden. Visitation will take place from 9:00AM until the time of the service in the church. Burial will follow in Walnut Grove Cemetery.