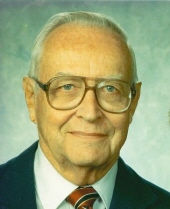 Elliott George Barske Sr. age 93, passed to his Lord in New Haven on August 23, 2013. The loving husband and 'boyfriend' of Shirley Clark Barske for 71 years of marriage. Elliott was Father to Elliott Jr. (Dianne) of Anchorage, AK, Barbara Hackett of Woodstock and Jeffrey of Thompson; brother to Charlotte Schmermond of Hamden. He was very proud of his eight grandchildren, and their life successes and bragged that he had 5 great grandchildren living throughout the country. Predeceased by his son-in-law, Gregory Hackett. Born in New Haven on February 7, 1920 to the late George and Emilie Ertelt Barske. Elliott lived in Hamden and was in the first graduation class of Hamden High School in 1937. He was proud to attend Yale University with the Class of 1941, where he was an active singer and pianist, singing with the Yale Glee Club with a claim to fame that he once sang with the Glee Club on the same stage as Frank Sinatra and Connie Haines in the Big Band era. He served in the US Navy in 1944 and thereafter began a long career in railroading, first with the New York Central RR and then The New Haven Railroad /Conrail as a specialist in Freight movement and handling until his retirement in 1980. After moving to North Haven in 1950, Elliott was a good family man and enjoyed over 55 years of camping each summer at Hammonasset. He had a love of reading, and history and maintained countless records and research of literature, Naval History and family genealogy. He was an avid Yale sports fan and loved attending Yale football, hockey and swimming events. He also was proud to be recently the Yale Alumni secretary for Classes graduating in the 1930's and 1940's. His true love in life was music. He was a lifetime member of the University Glee Club (and Bell Ringers) and throughout his life as part of the Church of the Redeemer Choir. He served as Historian for both groups. After retirement, Elliott and Shirley enjoyed trips to Europe, Hawaii, the Caribbean, and Alaska along with many short trips with the Elder Hostel program throughout the US. He was a solid father and such a good friend to so many from his work life, his life of song and many years with his best friends from Hammonasset. His dedication to his family and his literary and music interests framed his life and he will be fondly remembered for his love of Shirley and his love of life. A Funeral Service to honor the man and his music will be held at the Church of the Redeemer, New Haven at 4:00pm on Wednesday September 4th. Music will be provided by the Church Choir and members of the University Glee Club. A reception will follow at the church in their Fellowship Hall. A private burial will take place in Centerville Cemetery. BEECHER & BENNETT, 2300 Whitney Ave, Hamden in care of arrangements. In lieu of flowers, donations in Elliott's memory may be sent to the Church of the Redeemer, 185 Cold Spring St, New Haven, CT 06511 or the University Glee Club, c/o Michael Grappone, 360 Yale Ave, New Haven, CT 06515.