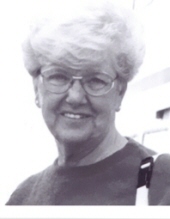 MERIDEN - Elsie G. Hafner, 75, of 265 West View Drive, died Monday, Nov. 28, 2005 at MidState Medical Center. She was the wife of Walter Hafner for 48 years. Born in Meriden, she was the daughter of the late Frank and Emma Krueger Gumz. As a young child, she moved with her parents to Germany and returned to the United States in 1947. Elsie worked as a secretary at Trumbull Electric Company (later General Electric) in Plainville, CT until 1960 when she retired to raise her family. She was a member of St. John Lutheran Church in Meriden. Elsie was very active in German and American choral singing in Meriden, the State of Connecticut as well as New England. She was secretary for the Connecticut Saengerbund for several years and sang with the Meriden Turner Society and Meriden Community Chorus. Elsie enjoyed traveling. Her friends will remember the many enjoyable cruises that they spent with her. Family and friends will also remember her beautiful garden, her skill of cooking, baking and the wonderful entertaining at her lovely home. She will truly be missed. Besides her husband Walter, she is survived by a daughter and son-in-law, Linda and Gavin Murphy of Hebron; a sister, Eleonore Kutzner in Germany; a brother and sister-in-law, Klaus and Virginia Gumz of Durham and several nieces and nephews. She was predeceased by her son, Hans Hafner; a brother, Winfried Gumz; and a sister, Esther Conlon. Elsie dearly loved her family and friends and always brought them together at holidays and family celebrations. Funeral service Friday, Dec. 2, at 11 a.m. at St. John Lutheran Church, 520 Paddock Ave., Meriden. Rev. Wallace Merdinyan will officiate. Relatives and friends may call Thursday from 4 to 8 p.m. at the Beecher & Bennett Flatow Funeral Home, 48 Cook Ave., Meriden. If desired, contributions in Elsie's memory may be made to the American Cancer Society, 538 Preston Ave., Meriden, CT 06450.