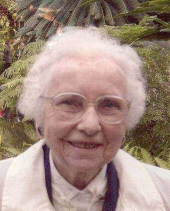 Elsie Lou Churchill, age 94, wife of the late John Wilbur Churchill, passed away on April 27, 2010 at her home in North Branford. Elsie was born in Alliance, OH on February 2, 1916 to the late John Benjamin Gregory and Jesse Aileen Peck Gregory. Elsie leaves daughters, Dr. Martha D. Bohn of Chicago, IL, and Barbara Jo Churchill of Cary, NC; a son, Gregory John Churchill of Jakarta, Indonesia; three granddaughters, Robin O'Brien, Stephanie Hedspeth & Laura Johnson; one grandson, Mark Bohn and six great grandsons. She was predeceased by her sister Eleanor Woodward. Elsie graduated from the University of Akron with a BS in education and served at the university as a secretary for many years. She was a member of Kappa Kappa Gamma Sorority since 1934 and was president of the Alumni Association in Buffalo, NY and in the Greater New Haven area. She has been a member of Spring Glen Church since 1959 and was active in the Women's Fellowship. For over 30 years, Elsie volunteered at Gaylord Hospital. Funeral Service and burial will be held privately with her family. BEECHER & BENNETT FUNERAL HOME, 2300 Whitney Ave, Hamden, are in care of her arrangements. Contributions in Elsie's memory may be sent to Spring Glen Church Memorial Fund, 20 Glen Parkway, Hamden, CT 06517 or Gaylord Hospital Memorial Fund, P.O. Box 400, Wallingford, CT 06492 or to Alzheimer's research at Alzheimer's Association, P.O. Box 96011, Washington, DC 20090-6011.