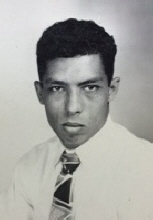 Emanuel (Puchy) Percy Perry, 76, husband of the late Stephanie Perry of East Haven, passed away on Friday July 1, 2016 at the VA Hospital, West Haven. He was born in New Haven on January 16, 1940 to the late Percy Emanuel and Vera Irene (Fath) Perry. He was predeceased by his brothers Robert and Charles Perry. He is survived by his children; Charlotte, Mark, Darren, and Shawn of Bermuda, Regina, Juanita, Tanya, Percy, Michael and Perry of the U.S., his sisters Margo (Perry) Walker of Columbia, SC, and Charlotte (Perry) Lawrence of West Haven, also 21 grandchildren and 2 great-grandchildren. After graduating high school, Emanuel enlisted in the U.S. Air Force where he proudly served our country for over 3 years. Following his Honorable Discharge, he became a welder, having worked for several companies in Connecticut, mostly for Schiavone Metal in North Haven. Friends are invited to attend a Graveside Service with military honors on Thursday July 7, 2016 at 10:30am at the State of CT Veteran's Cemetery, 317 Bow Lane, Middletown, CT 06457. In lieu of flowers, donations in Emanuel's name may be sent to the Fisher House Foundation, Inc., 111 Rockville Pike, Suite 420, Rockville, MD 20850.