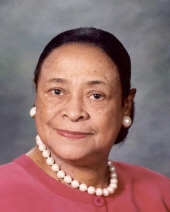 Emily A. Wilson, 87, beloved wife for 63 years to the late Donald C. Wilson passed away Dec. 31, 2009 in Baltimore MD after a brief illness. Mrs. Wilson resided in Ashlar Village in Wallingford since 2007, but was formerly a long-time resident in Bethany. She was born in New Haven, the daughter of the late James and Myrtle Braxton Stanley. Mrs. Wilson's career spanned 36 years with the Housing Authority of the City of New Haven, and at the time of her retirement she held the position of Director of Management. In addition, she was engaged in the professional development of her field as demonstrated by her involvement in the National Association of Housing and Redevelopment Officials, where she progressed to the position of a Vice President in the New England Region. She was extremely involved in the leadership of a number of civic organizations in greater New Haven. Over the years, she served on the Board of Directors of the Visiting Nurse Association, American Red Cross (South Central Chapter), Connecticut Council on Day Care Services, and American Heart Association. In addition, Mrs. Wilson was appointed to the Connecticut Gaming Commission by Governor Ella T. Grasso. She was the recipient of numerous civic and community awards for dedicated and distinguished service. Throughout her lifetime, Mrs. Wilson was deeply devoted to her church. She was committed to both her family church, St. Luke's Episcopal Church in New Haven, and Christ Episcopal Church in Bethany. In 1991, she was elected the national secretary of the Episcopal Church Women. At the Connecticut diocesan level of ECW, she served in many levels of leadership culminating as President. She was a member of the management board of Camp Washington; and was a member of the Executive Council and Standing Committee of the Episcopal Diocese of Connecticut. In addition, she was a leader with the Society of Companions of the Holy Cross. Mrs. Wilson was a founding member of the Waterbury chapter of The Links, Inc.; and was an active member of Chums/Hums, Inc. She is survived by her daughter, Donna Wilson Johnson and her husband, Charles W. Johnson of Baltimore, MD; a granddaughter, The Reverend Tracy Johnson Russell (Fitzroy), Vicar of St. Andrew's Episcopal church of New Haven; and a sister, Geraldine G. Brown of Durham, N.C. She was predeceased by her brothers James, Oscar and Winfred. A requiem Mass will be held on Saturday, January 9, 2010 at 11 am in St. Luke's Episcopal Church, 111 Whalley Avenue, New Haven. Family and friends are invited to a visitation at the church from 9:45 - 10:45am. Burial in Christ Episcopal Church cemetery in Bethany will be private. Arrangements are in care of Beecher & Bennett, 2300 Whitney Avenue, Hamden. In lieu of flowers, contributions in Mrs. Wilson's memory may be sent to: Your Place Youth Center, 155 Ivy Street, New Haven, CT 06511.