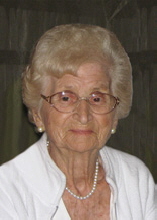 Emma DeMaio, 100 years old formerly of Woodbridge, CT entered into peace on Christmas Eve 2012. Emma was the beloved wife of the late John DeMaio and daughter of Joseph and Marguerite Perrone Soli. Mother of Barbara (Richard, Sr.) Reilly and Rocco (Eileen) DeMaio, Sr. and Grandmother of Richard, John, Scott (Michelle) and Robin Reilly and Rocco (Karla) DeMaio, Jr. She was the proud great-grandmother of John Jr., Zachary, Emma, Kaysie, Justin Reilly and Rocco DeMaio III. Her surviving sister is Teresa Cicala of Georgia and many loving nieces and nephews. Emma was predeceased by her siblings; sister Lucy Daginella and brothers John, Romeo, and Victor Soli. In her later years Emma worked in Beecher School as a cafeteria cook and was well known for her wonderful baking and cooking abilities. She was also an avid New York Yankee's fan and immensely enjoyed attending her grandchildren's sports events. Emma will be greatly missed by all of her family and friends. Her Mass of Christian Burial was celebrated on Friday, December 28th 2012 in the Church of the Assumption, Woodbridge, followed by her burial in Beaverdale Memorial Park. Arrangements were in care of Beecher & Bennett Funeral Home, 2300 Whitney Ave., Hamden.