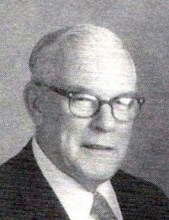 Eric Leon Stone Sr. passed away at home in Bethany on April 30, 2009. He was born in Woodbridge to the late Carl and Nettie Schilf Stone on November 21, 1918. Eric was a master craftsman who owned and operated several businesses throughout his lifetime. He was a highly skilled carpenter, cabinetmaker and millwright who achieved national recognition in the Architectural Digest for his construction of an award winning private residence in Stony Creek. For over four decades he maintained an active involvement in the Boy Scouts of America. He served in such varied scouting positions as Scoutmaster of Troop 7 in New Haven, leader of Council International Camporee units and 1965 National Jamboree. In recognition of his many years of service and leadership he was awarded the prestigious Silver Beaver Award. After moving to Bethany in 1963, Eric began a 'new' volunteer career as a state leader among municipal conservation and inland wetlands commissioners serving on both the Bethany Conservation Commission and Bethany Inland Wetlands Commission for over thirty years, the majority as chairman. He was instrumental in the formation of the Connecticut Association of Inland Wetlands and Conservation Commissions (CACIWC) and served as its first Secretary. He served on the West Rock Ridge State Park Advisory Committee from 1977 until 2005. He was named Bethany Citizen of the year in 1986, received the Bethany Conservation Award in 1978, a Public Service Award from the Secretary of the State in 2001 and a lifetime achievement award by CACIWC for 32 years of service to community and state in 2002.He represented the Town of Bethany on the South Central Connecticut Regional Water Authority's Regional Policy Board (RPB) from its inception until his election to the five member Authority. While on the RPB he served as Land Use Committee Chair for 4 years and Chairman of the Board for 6 years. In recognition of his many years of service to the SCCRWA an interpretive trail around Lake Chamberlain in Bethany was named in his honor. He shared his skills as a craftsman as a key worker and artisan in the restoration of the one room school house now located by the Bethany Community School. Eric was a devoted husband, father and grandfather. An avid gardener and conservationist he was a staunch believer that the land must be protected - since it will outlive us all. His calm, analytical and deliberative manner allowed him to be successful in all fields, professional and volunteer. His dry sense of humor, witty poems and musical talents were greatly appreciated and will be sorely missed by all he shared them with. He was predeceased by his beloved wife R. Lillian Carlson Stone and daughter Nancy Ann Stone Hosen. He is survived by his son Eric Stone Jr. and his wife Teresa of Beaverton, OR, his daughter Kristine Sullivan and her husband Gary of Bethany, his son Stephen Stone of Bethany, his grandchildren Eric L. Stone III and Corey T. Stone of Beaverton, OR, Michael and Margaret Sullivan of Bethany, Thomas Hosen of New Haven, Diana Catalde of Orange, and great-grandchildren Gaelyn and Eric IV Stone of Beaverton, OR, his sister Shirley Barrows of Butchell, WA, and predeceased by his brother William Stone. Friends may visit with his family at BEECHER & BENNETT, 2300 Whitney Ave., Hamden on Sunday, May 3rd from 6 to 8 p.m. A Funeral Service will be held on Monday, May 4th at 10:30 a.m. at the First Church of Christ Congregational511 Amity Road, Bethany. Interment to follow at Beaverdale Memorial Park. In lieu of flowers, memorial contributions in Eric's memory may be sent to the Clark Memorial Library, 538 Amity Rd., Bethany, CT 06524 or the Bethany Volunteer Ambulance Corp., 765 Amity Rd., Bethany, CT 06524.