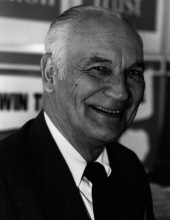 Cheshire- Eric Richard Hansen, 89, husband of the late Susan Kelsey Hansen for 65 years, of 150 Cook Hill Rd. passed away July 17, 2008 after a brief illness. He was born in NYC August 12, 1918 a son of the late Curt E. and Elvine Richard Hansen and had resided in Darien for 50 years from 1954-2004 before moving to Cheshire. He retired from the Union Trust Bank of New Haven as President, and also served in the Board of Directors. While in Darien he and his wife were active members of St. Luke's Episcopal Church, and he was Commodore of the Noroton Yacht Club. Mr. Hansen attended Yale University before serving in the US Navy as a pilot during WW II. He is survived by a son Eric R. Hansen, Jr., and his wife Jennye Hansen of New Haven, a grandson Christopher Eric Hansen and his wife Elizabeth Hansen of New Haven, a granddaughter Catherine Evelyn Sherrick and her husband Matthew Sherrick of Mason, OH, three great-grandchildren, Marley Elise Hansen, Drew James Sherrick and Madison Ryan Sherrick. He was predeceased by two brothers Edwin A. Hansen, and Clifford H. McCall, Jr. A service of interment will be held on Saturday, October 25 at 11:00 am in the Chapel of St. Luke's Episcopal Church, 1864 Post Road, Darien, CT. Arrangements in care of BEECHER & BENNETT, 2300 WHITNEY AVE., HAMDEN. Memorial contributions may be sent to Pomfret School, 398 Pomfret St., Pomfret, CT 06258 or a charity of one's choice.