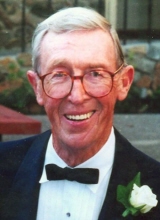 Ericsson B. 'Pete' Broadbent passed away peacefully on October 8, 2011 . He was 85. He was born in 1926 in Hamden , CT to Ericsson B. and Mary Lambert Broadbent and was predeceased by his brother Robert B. Broadbent and sister Sarah Broadbent Day. Pete worked for Connecticut General Life Insurance as an estate planner from 1951 until his retirement earning numerous awards and distinctions culminating in his qualifying as a life member of their Honor Table, the highest honor bestowed by the company. He and his wife Virginia 'Ginger' O'Hearn Broadbent moved to Hamden in 1956 where they raised their family of four children. Pete served on Hamden 's Board of Education from 1964 to 1969 and as Chairman of the Board for four years. He was named 'Hamden Citizen of the Year' in 1969 by The Hamden Chronicle. An engineering graduate of Yale University ('47) he was active in various campaigns for Yale and was named Chairman of the Greater New Haven Committee of the Campaign for Yale in 1976. His alumni activities included past presidency of the Yale Club of New Haven and past vice-chair of Yale's fundraising program for the Arts and Sciences in the early 1960's. He was a Trustee of Quinnipiac University, Hamden Hall Country Day School and Yale's Club of Southwest Florida. A passion for the game of golf led him to serve as an official and referee for the CSGA, the CWGA (refereeing many championship finals), and the USGA Senior Amateur. Pete served on many boards and committees of the CSGA (President 1987-88), the New Haven Country Club (President 1969), and as a member of the USGA Senior Amateur Championship committee for many years. In 2008 the CSGA inducted him into the Connecticut Golf Hall of Fame for 'Distinguished Service'. In 1967 he set a course record 65 at the New Haven Country Club. This year the NHCC named their Annual Member Guest tournament in his honor. He is survived by his wife of 56 years, Ginger, children Peter, Eric, Michael, and SusanMary Redinger, their spouses, and seven grandchildren. Friends may visit with his family at Beecher & Bennett Funeral Home, 2300 Whitney Ave., Hamden on Friday, October 28, from 5:00 to 7:00 p.m. and may attend a memorial service at Beecher & Bennett, on Saturday, October 29, at 10:00 a.m. Flowers are gratefully declined. Contributions in his memory may be made to the Masonic Charity Foundation Quality of Life Fund, P.O. Box 70, Wallingford, CT 06492, or to a charity of your choice.