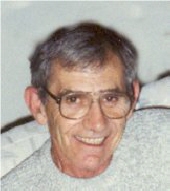 Erio Michael Gibertoni, 81 beloved husband of 56 years of Sara Carrolla Gibertoni of Cheshire, passed away Feb. 17, 2012. He was born in Hamden, August 12, 1930 a son of the late Orazio and Dorina Gherardi Gibertoni and proudly served in the US Army and the Army National Guard from 1949-1953. He was a dedicated, devoted family man. His grandchildren were his pride and joy. Erio cherished spending time with his family, and he enjoyed sharing in all of their special occasions and attending his grandchildren's activities. He is survived by his daughter, Gail Larson and her husband Thomas Larson of Cheshire, his grandchildren Thomas and Erica Larson of Cheshire, a sister Nora Riccio of Hamden, and sister-in-law Marie Carrolla of Cheshire. Mr. Gibertoni was predeceased by a daughter Sandra Gibertoni, and brothers Lindo Gibertoni, Lorenzo Gibertoni, and sisters Erma Vermiglio, Lillian Maggi, Edith Dringoli, Nancy Brown, and Enus Gibertoni. A Mass of Christian Burial will be celebrated on Tuesday, Feb. 21, at 11 am in Our Lady of Mount Carmel Church, Hamden. Interment with Military Honors will follow in All Saints Cemetery. Arrangements in care of BEECHER & BENNETT, 2300 WHITNEY AVE., HAMDEN. Contributions in his memory may be sent to the Wounded Warrior Project 4899 Belfort Rd., Suite 300, Jacksonville, FL 32256, woundedwarriorproject.org.