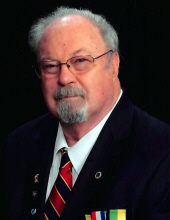 Ernest Clifford Gunn, 81, passed away Monday, January 28, 2019 in Windham Hospital, Willimantic, CT. Ernest had been battling pneumonia and several other health problems due to diabetes. He was born in New Haven on June 6, 1937 to Clifford and Jane (Betts) Gunn. Ernest was good-natured and had a great sense of humor, which he never lost. Through poor health and surgeries, he remained cheerful. He received a Bachelors degree in music education from Western CT State University, and later his Masters and sixth-year degrees from Southern CT State University. He taught music and 5th grade in North Haven public schools for 37 years. In his teens Ernest was a member of the Order of DeMolay, and was the organist for their meetings. Also a member of his church youth group, he would go on camping trips with Park Ranger Fred Rungee and other group members in the woods of Bethany. Ernest was later a Good Humor ice cream vendor, and a Macy's white flower assistant manager at nights and during summers. He also served as a coach for his son's Little League baseball team. An avid philatolist, his stamp collection was large and fine. His travels took him to London, Greece, Italy, Alaska, France, and Sweden. On a second trip to Sweden, he studied Swedish music at Uppsala University. A man of many talents, he enjoyed ice dancing, doing crossword puzzles, and was an excellent cook. He was also a voracious reader and an avid Red Sox and Patriots fan. For nearly twenty years, Ernest was the music director of the Hamden Festival Chorus. He later became the music director/conductor of the American Union of Swedish Singers (A.U.S.S.), an international singing society. This brought him across the U.S. to music conventions and concerts, sometimes with 400 voices joining him onstage. To honor this service, the Swedish government and the A.U.S.S. presented him with three medals. Having a rich bass singing voice, he joined the New Haven Chorale and sang on the New Haven Schubert stage in the opera Il Travitore. Ernest also sang at New Haven's Woolsey Hall in Benjamin Brittan's Requiem with a combined voice choir under the direction of Robert Shaw. Surviving Ernest is his wife of 33 years, Betsy Schumacher Olsen Gunn, formerly of Hamden and currently of Ashford, CT; his son, William Harlow Gunn (Amanda Mitchler) of Branford; grandchildren, Carolyn, William, Meredith, and Delaney Gunn; stepchildren, Stephen Olsen (Jennifer Clark), Christine Olsen Gillikin (Bryan); and step-grandchildren, Alexander Gillikin (Sara), Elisabeth Gillikin, Silas Olsen, and Eliza Olsen, as well as his loving nieces and nephews. He was predeceased by his brothers, Robert and David Gunn. Friends may visit with his family on Friday, February 1 from 4:00-7:00 p.m. at Beecher & Bennett Funeral Home, 2300 Whitney Ave., Hamden, and are also invited to attend his funeral service on Saturday at 11:00 a.m. in Christ Lutheran Church, 600 Shepard Ave., Hamden. Burial will be private. In lieu of flowers, donations in Ernest's memory may be made to the American Diabetes Association, P.O. Box 15829, Arlington, VA 22215.