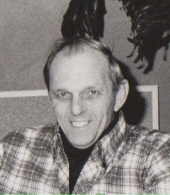 ORANGE - Ernest 'Ernie' C. Kirchberg, 88, of Russell Avenue, husband of the late Muriel Gerard-Kirchberg, son of the late Carl & Louise Tetzlaff Kirchberg, peacefully passed away on Monday, May 30, 2011, at the Veteran's Administration Hospital in West Haven. Ernie was born in Hamden on April 25, 1923, and was a resident of Orange for 80 years. He married Muriel Gerard in 1946. He was a WWII veteran, having served in Guam, Saipan, and Tinian. He was also a retired active member of the Orange Volunteer Fire Department. He was a member of the New Haven Seventh-day Adventist Church, and enjoyed volunteering within the church and the Town of Orange. Survivors include his long-time companion, Mary Cotteiro; two daughters, Linda Seideman of Harrah, OK, Betsy Kirchberg of Orange; three sons, Earl Kirchberg and his wife Kallie, of South Lancaster, MA, Paul Kirchberg and his wife Debbie, of Orange, Eric Kirchberg and his wife Ivy, of Battle Creek, MI; seven grandchildren, Alexander, Demetri, and Nicholas Kirchberg of South Lancaster, MA, Johnathan Kirchberg of Orange, Paul Michael Kirchberg and his wife Smita, of Milford, Michael O'Brien of West Haven, and Zachary Kirchberg of Battle Creek, MI; two great-grandchildren, Aria Kirchberg of Milford, and Kaitlyn O'Brien of Stratford. A Funeral Service will be held at BEECHER & BENNETT, 2300 Whitney Ave., Hamden on Friday, June 3rd at 9:30 a.m. followed by a Burial with Military Honors in Hamden Plains Cemetery. Friends may visit with the family on Thursday evening from 4 to 8 p.m. at the funeral home. In lieu of flowers, contributions in Ernie's memory may be sent to the Orange Volunteer Fire Department, 625 Orange Center Road, Orange, CT 06477.