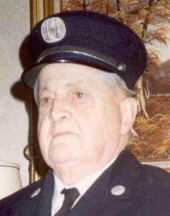 In West Haven, Nov. 22, 2005, Ernest Ludwig Anderson, Jr., a life long resident of George Street, West Haven. Husband of Doris Sherman Anderson. Born in West Haven on June 30, 1916, he was the son of the late Ernest L. and Louise Behl Anderson, Sr. Ernest had been an employee of the New York, New Haven and Hartford Railroad, the Pen Central Railroad and Conrail as a Purchasing Agent for 54 years. He was a Volunteer Fireman of the West Haven Fire Department, Co. # 1 for over 70 years and was recognized as the "Oldest Fire Fighter in West Haven". He had been the Treasurer of the West Haven Fireman's Benevolent Association for many years. Ernie served in the U. S. Army Air Force, 94th Bomber Group during W.W.II, with duty in the European, African and Middle East Theaters. He was a member of the First United Methodist Church. Besides his wife, he is survived by a daughter Judith Anderson of Wallingford, two sons, David Anderson and his wife Kathy of West Haven and Stephen Anderson of Wallingford and grandchildren, Sarah and Mark Anderson. Funeral service at the BEECHER AND BENNETT - TAYLOR FUNERAL HOME , 410 CAMPBELL AVE, WEST HAVEN on Sat., Nov. 26th at 10 a.m. Friends may call on Fri. from 4 - 8 p.m. Memorial contribution may be sent to The First United Methodist Church, 89 Center Street , West Haven, CT 06516.