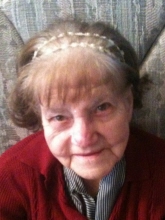 Estella Campion Toifl, 94, died peacefully on Wednesday, January 29, 2014 at MidState Medical Center after a lengthy illness. She is the wife of the late Clarence Toifl. Born in Springfield, MA, Estella moved to Meriden at the age of 8 where she lived the rest of her life. She is survived by her daughter and son-in-law, Sandy and Ken Failing of Meriden and her beloved grandchildren Alicia and Scott Failing of Las Vegas, NV. She is also survived by several nieces and nephews and their families; Kent Peterson of East Hampton, Lee and Betty Peterson of Meriden, Noelene and Brian Peterson of Wallingford, Sharon and Jim DeForest of Vero Beach, FL and Sheryl and Bob Snyder of Vero Beach, FL. In addition to her husband she is predeceased by a daughter, Karlyn Toifl, a sister Dorothy Campion and two brothers, Raymond and Frank Campion. A funeral service will be held on Saturday, February 1, 2014 at Beecher & Bennett-Flatow Funeral Home, 48 Cook Ave., Meriden at 11am, the Rev. Eric Henderson will officiate. Burial will be at the convenience of the family. Relatives and friends may call at the funeral home on Friday, January 31 from 5-8pm. In lieu of flowers donations may be made to the Sunshine Kids (benefitting children with cancer) at BHHS, 441 North Main St., Southington, CT 06489.