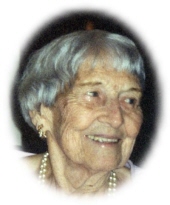 Mrs. Ethel H. Grimmell died Sunday, March 22, 2008 at the Whitney Center in Hamden, CT. She was 100 years, 6 months and 12 days old. She was born on September 10, 1907 in Brooklyn, NY, the daughter of the late Fredrick and Hedwig Frohner Haggren. She graduated from Girl's High School in Brooklyn at the top of her class and took a position as a secretary at the Wagner Electric Company. Subsequent to her marriage to the late Charles H. Grimmell, she became a devoted homemaker and then mother. She returned to the work force in 1963, becoming the administrative assistant to the chairman of the Economics Department at Long Island University in Brooklyn. She remained in that position until she reached its then mandatory retirement age of 70, enjoying interactions with students and the department faculty. Mrs. Grimmell continued to live in Brooklyn until the mid 1980's when she moved to Westport, CT. She remained in Westport until 1996 and then moved to the Whitney Center in Hamden. She spent her summers from 1934 through 1997 at Breezy Point on New York's Rockaway Peninsula, where she had earlier met her husband. Mrs. Grimmell enjoyed a near lifelong romance with the English language, a massive Merriam Webster Unabridged Dictionary long being one of her prized possessions. She was as avid reader, known to frequently read entire Sunday New York Times news sections. She loved discussions of and debates concerning politics and national and international affairs. The Atlantic Ocean long held and allure for her, both as a place to swim and a source of serenity during long walks with friends and/or family along its Breezy Point Shore. She was preceded in death death by her husband, Charles, and her two brothers Gustav and Fredrick Haggren. She is survived by her two children, Dr. Karen Grimmell (William Joughin) of Guilford, CT and Dr. William Grimmell (and wife Barbara) of Oak Ridge, TN, five grandchildren, Dr. Robert O'Rourke of Portland, OR, Mr. Steven O'Rourke (and wife Cristina Osmena) of New York, NY, Mrs. Erin Herron (and husband William Blake) of Pacific Palisades, CA, Mrs. Lisa Jablonowski (and husband Jeffrey) of Centerport, NY and Mrs. Catherine Mew (and husband Thomas) of Kennesaw, GA. She is also survived by nine great grandchildren, Brianna Jablonowski, Cole Herron, Tess Jablonowski, Sophia Herron, Julian O'Rourke, Christian O'Rourke, Alec O'Rourke, Isabel O'Rourke and Eden Mew. Isabel come into this world just 16 days before and Eden two and one half hours before Mrs. Grimmell passed from it. ('One generation passeth away, and another generation cometh: but the earth abideth forever'). Mrs. Grimmell will, in keeping with her wishes, be cremated, arrangements in care of BEECHER & BENNETT, 2300 WHITNEY AVE., HAMDEN, and specially remembered when much of her far flung family is again together for a memorial service at a later date. The family asks that any memorials be made to one of her favorite organizations: Fidelco Guide Dog Foundation, 103 Old Iron Ore Road, Bloomfield, CT 06002.