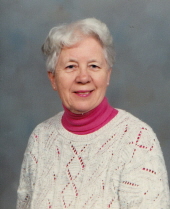 Ethel H. Massey, 92, of Hamden, CT, died peacefully on September 6, 2013, at her home at Whitney Center in Hamden. Daughter of Halsted and Helena Heap, Ethel was born on May 28, 1921 in Providence, RI. She is survived by her husband of sixty years, Professor William S. Massey, Emeritus of Yale University. She is also survived by her children and their spouses, Eleanor and John Cox of Simsbury, CT, Alexander Massey and Helen Cheng of Cameron Park, CA, and Joan Massey and John Rohrbach of Fort Worth, TX, and her grandchildren, Thea and Ty Cox, Kathleen and Emily Massey, and Ethan Rohrbach. Ethel was predeceased by her brother, Edward Heap. A 1943 graduate of Winthrop College in Rock Hill, SC, Ethel worked as a reporter for the Associated Press in Baltimore in the 1940s, a time when female journalists were uncommon. She met her husband while working as Executive Assistant to the Provost of Brown University. After raising her family, she returned to work as a secretary at the Connecticut Agricultural Experiment Station, where she worked for over a decade. Ethel was an avid reader, a wonderful story teller, and believed deeply in the importance of family. She was a long term member of the Unitarian Society of New Haven. A Memorial Service and reception will be held on Wednesday, September 11, 2013, at 3:00pm, at Whitney Center, 200 Leeder Hill Drive, Hamden, CT. Contributions in Ethel's memory may be made to Friends of the Hamden Library,www.hamdenlibrary.org/friends, 2901 Dixwell Avenue, Hamden, CT. Arrangements are in care of Beecher & Bennett Funeral Home, 2300 Whitney Avenue, Hamden, CT, 06518.