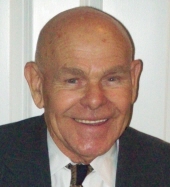 Eugene Arthur Witheril, 80, of Hamden passed away on Wednesday, July 18, 2012 at the Hospital of St. Raphael. Loving husband of 62 years to Zeata Straube Witheril, he is also survived by his loving children, Linda Kasowitz and her husband Marvin of West Haven, Patrick Witheril and his wife Denise of Guilford and Peggy Choiniere and her husband Ed of Bethany; grandchildren, Kate and Jill Kasowitz, Allison Romanoff and her husband John, Meghan Witheril, Stefanie Benoit and her husband Joseph, Sydney Witheril, Matthew and Timothy Eckman and EJ, Cherilyn, Billy, Mike and Joey Choiniere; great-grandchildren, Grace McCarty, Charlotte Romanoff and Amelie Choiniere; a brother, Theodore Witheril of Wisconsin and lifelong best friends Joanne and Dick Westphal of FL and his puppy Daisy. He was predeceased by his infant son, Gerald Witheril and three brothers, Richard, Jr, Gerald and Arthur Witheril. A son of the late Richard and Margaret Christensen Witheril, Eugene was born March 2, 1932 in Racine, WI. He was employed for many years by McDonald's Corp. as a field operations manager and was VP of Franchising in and outside of the US. Eugene's most recent passion was real estate and he was the owner of Witheril Realty and was active until his retirement. He was also active in APPA, American Pool Players Assoc, an avid car enthusiast and a Red Sox and UConn Women's Basketball fan. Gene was most proud of his children, his grandchildren and his beautiful bride Zeata. His family is grateful for the loving care he received in the Hospital of St. Raphael Coronary Care Unit. Friends may visit with his family Saturday, July 21, 2012 from 4:00 to 6:00 PM at BEECHER & BENNETT, 2300 WHITNEY AVE, HAMDEN. In lieu of flowers, contributions in his memory may be made to the American Diabetes Assoc, 300 Research Parkway, Meriden, Connecticut 06450.