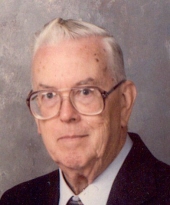 Eugene George Eureka, Sr., 89, of Hamden, passed away on September 3, 2014 at his home. Born in New Haven on February 1, 1925 to the late George and Ellen Knudsen Eureka. Husband of the late Margaret McMahon Eureka. Eugene is survived by his son, Eugene G. Eureka, Jr. and his wife Marilyn of South Meriden; two grandchildren, Michelle and Quinn Eureka; nephew, Ronald Jacobson of NH. He was predeceased by his brothers, Dwight and Ogden Eureka and Elwood Anderson; his sisters, Alta Jacobson, Esther Pfeiffer and Dorothy Fisher. Eugene was a proud US Army Veteran having served during WWII. He was a member of the American Legion post 88 and the Veterans of Foreign Wars. For many years, he was a system-assembler at Fluid Control in Hamden and a self-employed horologist. Friends are invited to join Eugene's family at Beaverdale Memorial Park, Section J, on Monday, September 8th for a Graveside Service with Military Honors at 10:00 a.m. Arrangements in care of BEECHER & BENNETT FUNERAL HOME, 2300 Whitney Ave, Hamden. Contributions in Eugene's memory may be sent to the Meriden Humane Society, www.meridenhumanesocietyct.com ,311 Murdock Ave, Meriden, CT 06450.