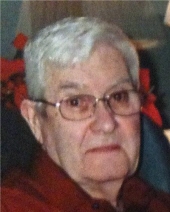 Eugene Peter MacNeil 85, of Orange, Connecticut died January 23, 2010 at Saint Raphael's Hospital, New Haven, CT surrounded by family and friends. He is survived by Elsie Mae MacNeil his loving wife of 58 years, his son and daughter-in-law, Wayne Peter MacNeil and Helena VanderHeijden MacNeil, of Boylston, MA, his daughter Lynda Noble MacNeil, of San Jose, CA, and his sister, Dorothy Victor, of Orange, CT. He was a WWII Army veteran. He was born May 18, 1924 at 191 Valley Street, Westville, New Haven, CT, the son of the late Percival McNeil and Marguerite Mulligan McNeil. He was the third eldest of five siblings. He grew up in Westville attending Commercial High School and Benton Grammar School. Eugene was the star player on his high school hockey team and also played centerfield on the High School baseball team. He graduated High School and enlisted in the U.S. Army at the age of 18 in 1942. He reached the rank of Staff Sergeant as part of the Headquarters Battery, 20th Antiaircraft Artillery Group. A disabled World War II veteran, he recovered significantly from head and shoulder injuries at the Oliver General Hospital in Augusta, Georgia in 1944. After his discharge, he entered New Haven's Junior College of Commerce (later Quinnipiac College) and graduated with an A.S. in Accounting in 1947. He worked for public accounting firms B.B. Adler & Company and Jack Zempsky & Company, and was Office Manager and Comptroller for the William Hotchkiss Company, in New Haven, for some 20 years before serving as Treasurer and General Manager for Missionaries of LaSalette, in Cheshire, CT. On January 31st, 1952 he married Elsie Mae MacLeman, in Hamden, CT and had 4 children over the next 6 years. He was a long time resident of Cheshire, where he was elected (Democrat) to the Cheshire Board of Finance and raised a family at 21 Clovervale Lane. Eugene did many tax returns every year for friends and family. He also managed accounting, as a side job several evenings per week, for the Cheshire Medical Group (Drs Dayton, Oxnard and Moore). He continued with his love of sports and teaching others by being a coach in the Cheshire Babe Ruth Baseball League. He coached 3 teams that won championships and many of his players stayed in contact with him into their adult years. He also loved bowling and was a long time member of the Cheshire Men's League. He was a member of the Knights of Columbus, the Elks Club and was a devoted Catholic who attended numerous retreats during his life. He was a parishioner at St. Aedan's Church, Westville; St. Bridget's Church in Cheshire, St Thomas Becket in Cheshire and at St. Louis Church in West Haven. Mr. MacNeil was predeceased by his daughters Robin and Dawn, his brother Ed and sisters Margaret and Virginia. Funeral from BEECHER & BENNETT-TAYLOR FUNERAL HOME, 410 Campbell Ave., West Haven Thursday, January 28th at 10:30 a.m. A Mass of Christian Burial will be celebrated in the Church of St. Louis, 89 Bull Hill Lane, West Haven at 11 a.m. A wake will be held on Wednesday, January 27th from 4 to 8 p.m. A private burial will be held later at St. Lawrence Cemetery in West Haven. In lieu of flowers contributions may be made to the Disabled American Veterans, P.O. Box 14301, Cincinnati, Ohio 45250-0301, Attention: Gift Processing.