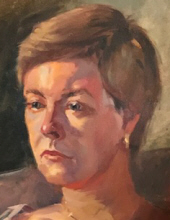 Eugenie Compton French died peacefully on November 2. She was born in New Haven, CT on April 13, 1938, the daughter of Eugenie and Douglass Compton of Madison, CT. She graduated from New London High School, Garland Junior College in Boston, MA and the Paier College of Art in Hamden, CT. She met and married Richard 'John' Hart Pille in 1958 in Boston, MA. They moved to Ithaca, NY, then settled in Binghamton, NY, where they lived for many years, until their divorce. She relocated to Hamden CT in 1980, where she graduated from Paier College of Art and married Ron French in 1989. Eugenie was predeceased by Ron French, who passed away January 1, 2018. For many years, Eugenie ran the Hobby Horse Studio of Art from their home in Hamden, CT, where her love of art and her talent in art instruction touched the lives of many children and adults. Her watercolors, acrylics and oil paintings hang on the walls of homes all over the world. She had been a resident of the Laurel Woods Nursing Home in East Haven, CT for many years, where she held several art exhibits of her work. She was a member of the Laurelwood Red Hat Society, and a member of the National Society Daughters of the American Revolution. Until the end of October, Ms. French's artwork was on display at the East Haven Library. The Connecticut Watercolor Society accepted her work, and her dream was to be a member of the National Watercolor Society. Eugenie is survived by two children-John Pille of Binghamton, NY and Elizabeth Compton Pille-Speacht of San Diego, CA, and two grandsons-Alexander Georges of Temecula, CA and Maxwell Georges of Kandahar, Afghanistan. She is also survived by her sister, Nathalie Compton Logan of Duxbury, MA and her brother and sister-in-law, Douglas & Kathy Compton of West Hartford, CT. She also leaves behind her stepdaughter, Roxanne French, and three step-grandchildren. For over 40 years she was active in the AA program, and mentored many in the recovery process. The light she brought with her-into any room she entered-will be missed. A Memorial Mass of Christian Burial will be held on Friday November 16 at 11 am in St. Margaret Church, 24 Academy St., Madison. Interment to follow in West Cemetery, Madison. In lieu of flowers, donations can be made in Eugenie Compton French's name and sent to: Paier College of Art, Attn: Maureen & Jonathan Paier, 20 Gorham Avenue, Hamden, CT 06514. Services have been entrusted to Beecher & Bennett Funeral Home, Hamden.