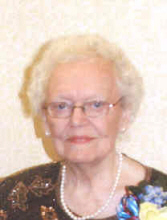 Evelyn A. Currier, 81, of Masonicare Health Center in Wallingford, passed away on Feb. 4, 2010, surrounded by her family. Evelyn was the wife for 62 years of the late Walter F. Currier. A longtime resident of West Haven prior to moving to Wallingford in 2009, Evelyn was born in New Haven, on Feb. 16, 1928, daughter of the late Herman and Evelyn Wellington Drehs. Evelyn leaves a daughter Gail Evarts and grandsons Jason and Eric Evarts, all of Newington. She was predeceased by a brother William Drehs and son-in-law Raymond Evarts. She had worked in the Trust Department of the former First Bank for 20 years and retired in 1982. She was Past Matron of Golden Rod Chapter #34 OES and was a member of Newington Chapter #115 OES. Funeral service Tuesday, Feb. 9 at 10:30 a.m. at BEECHER & BENNETT-TAYLOR FUNERAL HOME, 410 Campbell Ave., West Haven. Friends may call on Monday from 5 - 8 p.m. Eastern Star service will be at 7 p.m. Interment in Beaverdale Memorial Park. In lieu of flowers memorial donations may be made to the Grand Chapter of CT, O.E.S., Hospital Endowment Fund, PO Box 143, Plymouth, CT 06782.