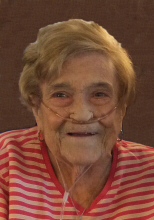 Evelyn J. Slick, 94, of Hamden, passed away at Gaylord Hospital on Dec. 25, 2014. She was the wife of the late James L. Slick. Born in Crete, NE on April 5, 1920, she was the daughter of the late Percy L. and Jennye Montanye Munro. After growing up in Crete, she moved to Omaha, NE, then to Rockford, IL, where she resided for over 40 years, and finally settled in Hamden in 2003. She leaves behind a daughter, Jennye (Eric) Hansen, of New Haven. She is also survived by two grandchildren, Catherine (Matthew) Sherrick, of Mason, OH, and Christopher (Elizabeth) Hansen, of Hamden, and four great-grandchildren, Marley Hansen, Barrett Hansen, Drew Sherrick, and Madison Sherrick. She is predeceased by her brother, Fred C. Munro. After graduating as a math major from Doane College in Crete, she went on to work at Mutual of Omaha, Nebraska Clothing Co, and later as an Administrative Assistant at Rockford College, and at an advertising agency in Rockford. She also volunteered at the Rockford Memorial Hospital for over 30 years. She was a proud member of the Daughters of the Nile, the Court St. Methodist Church in Rockford, where she sang in the choir, and the Mauh-Nah-Tee-See Country Club. She was also an avid golfer and dog lover, especially her three beagles and her daughter's Springers. A memorial service will be held on January 7, 2015 at 1:30 PM at Benchmark Assisted Living in Hamden, 35 Hamden Hills Drive. Contributions in Evelyn's memory may be made to the Smilow Cancer Center at Yale-New Haven Hospital, 15 York St, New Haven, CT 06510 or given online at Smilow Cancer Center, or to the New England English Springer Spaniel Rescue P.O. Box 407, Ashland MA 01721 or to a charity of one's choice.