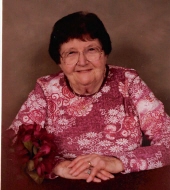 Evelyn M. Donath, 96, of Wallingford, passed away at Masonicare on October 14, 2015. She was the wife of the late Otto W. Donath. Born in New Haven on February 19, 1919 to the late Harold & Iva Clark Clark. Evelyn will be remembered by her daughter, Evelyn Montano & her husband James of Cheshire; daughter-in-law, Ruth Nagy & her husband James of Wallingford; nine grandchildren, many great- grandchildren and several nieces & nephews. Predeceased by her brothers, Howard & Herbert Clark. Evelyn was a member for 67 years of the Mystic Chapter #20, O.E.S. and a Past Matron. She was also a member of Alice Chapter #76, O.E.S. and on the advisory board of Evergreen Assembly, International Order of Rainbow for Girls, and a member of the White Shrine of Jerusalem. Also, a former Girl Scout and Brownie Leader and a Cub Scout Den Mother. For many years she was a volunteer at Masonicare, was a member of the Mother's Club, 50/50 Club, and the NCT National Camping Travelers. Evelyn was also a longtime member of the Mt. Carmel Congregational Church. Friends are invited to visit with her family on Friday, October 16th from 5:00 to 8:00 p.m. at BEECHER & BENNET, 2300 Whitney Ave, Hamden. An Eastern Star Service will be held at 7:00 p.m. Her Funeral Service will be Celebrated on Saturday morning at 11:00 a.m. in the funeral home followed by a burial in Centerville Cemetery. Contributions in Evelyn's memory may be sent to Mt. Carmel Congregational Church, 3284 Whitney Ave, Hamden, CT 06518.