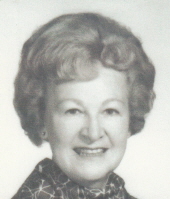 Evelyn Mae Toelle Klaiber's long and full life ended peacefully on September 10, 2013 at Connecticut Hospice, Branford, CT. She was 97. She was a resident of North Haven, Connecticut since 1959. She was the wife of the late George A. Klaiber Jr. for 63 years until his death in 2004. Evelyn was born in New Haven, Connecticut on August 18, 1916. She was the daughter of the late Henry H. and Anastasia Toelle. A graduate of Hillhouse High School in 1933, Evelyn attended Larson College (now Quinnipiac University) and was a member of the Alpha Pi Epsilon honor society. After graduation in 1935 with an A.S. Degree, she was employed at both the Penn Mutual Life Insurance Company and the United Manufacturing Company. Evelyn retired from the New York, New Haven and Hartford Railroad, where she worked as an Executive Assistant. After the birth of her children, Evelyn served as the President of the Margaret L. Keefe School PTA. She was also the secretary of the Keefe School Band Music Parents Club, and was instrumental in the creation of a Hamden Cub Scout pack. Evelyn was a lifelong member of Trinity Lutheran Church, New Haven, CT, where she taught Sunday School, served as Secretary and Treasurer of the Lutheran Church Women's group, and was a member of the Church Council. In retirement, Evelyn traveled extensively with her husband and cruised all over the world. 'She lived for her family and saw them as much as possible'. Beloved Mother of The Reverend G. Robert (Joan) Klaiber of Roseville, MN and Karen (Douglas) Golden of Hamden, CT. Beloved Grandmother of Paul (Tanya) Klaiber of Mahtomedi, MN and Karin (Jeff) Berg of Minneapolis, MN. Beloved Grandmother of Leigh (Dawn) Golden of New Haven, CT and Kent (Christine) Golden of Woodbridge, CT. Beloved Great-Grandmother of Owen, Alice and Eda Berg, and Rowan and Greta Klaiber. Funeral Services will be conducted at Trinity Lutheran Church, 292 Orange St., New Haven, CT on Saturday morning, September 14, 2013 at 10:00AM. Interment will follow in Evergreen Cemetery. The visiting hours will be at BEECHER & BENNETT FUNERAL HOME, 2300 Whitney Ave., Hamden on Friday, September 13, 2013 from 4:00 PM to 7:00 PM and at the church from 9:00AM until time of service. In lieu of flowers, memorial contributions may be made to Trinity Lutheran Church, 292 Orange Street, New Haven, CT 06510. http://www.trinitylutherannh.org