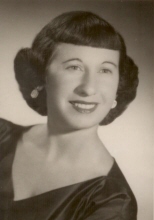 Evelyn Penn Platcow passed away at Conn. Hospice in Branford with her loving family by her side on Saturday, May 9, 2015. Born and raised in New Haven, she resided most of her adult life in New Haven and later in Hamden. Evelyn was the daughter of the late Philip E. Platcow and Mollie Penn Platcow. Her dad was Alderman of the old Sixth Ward in New Haven for many years. Evelyn is survived by her brother, Willard S. Platcow, and sister, Florence S. Platcow, both well-known educators in the New Haven area. Throughout her life, Ev had to face many physical challenges but never allowed them to overwhelm her. She was both vivacious and had a great zest for life. Ev also had a wonderful sense of humor and was known to be feisty. Needless to say, Evelyn will be sorely missed by her family and many friends. Evelyn was very versatile and had many talents, one of which was singing. She had a beautiful mezzo-soprano voice and sang at many weddings and political affairs. She studied opera under the brilliant tutelage of Professor Jacunto Marcosano. In addition to her musical skills, Evelyn was very knowledgeable in the medical field and served many years as Medical Supervisor at the Conn. Welfare Dept. on Bassett St. in New Haven. Ev's family would like to thank the following people at Yale-New Haven Hospital - 7th Floor - East Pavilion: Debbie, Jill, Carlos, Rochelle and Tony. They were very kind to Ev and her family, and they will never be forgotten. At Conn. Hospice the family would like to thank Kelly, Dawn, and Diane (Supervisor of Nurses) for being so helpful. Funeral Services have been entrusted to BEECHER & BENNETT, 2300 Whitney Ave., Hamden. There will be no calling hours and interment will be private.