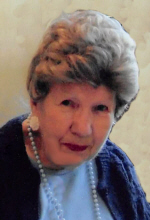 Evelyn Ruth Skelly, age 92, of Hamden, passed away on March 8, 2015. She was born in New Haven in 1922 to the late Joseph and Ruth Brandt Skelly. She attended Hamden schools, earned a Bachelor's Degree from Albertus Magnus College, and two Master's Degrees from Fairfield University. She worked for Southern New England Telephone Company. She was a member of the Hamden Arts Commission from its formation in 1975 until 2011. Evelyn also served on the Hamden Board of Education, the Connecticut Association of Boards of Education, and on the boards of many other organizations, including School Volunteers of New Haven, Literacy Volunteers, Neighborhood Music School, Fellowship House, Connecticut Storytelling Center, and ACES. She was a president of Orchestra New England and Long Wharf Theatre Guild. She was a member of Quota Club of New Haven, the Catholic Charity League, Telephone Pioneers, and Friends of the Hamden Library. Among the awards she received were the YWCA Woman of the Year, a Hamden Notable, and a Connecticut Business Education Association Outstanding Business Leader. At her church Evelyn was a lector and a minister of the Eucharist. She is survived by her sister Elinor Skelly. Funeral from BEECHER & BENNETT FUNERAL HOME, 2300 Whitney Ave., Hamden Wednesday at 9:15 AM followed by her Mass of Christian Burial to be celebrated at 10:00 AM in Our Lady of Mt. Carmel Church, Whitney Ave, Hamden. Friends may also visit with her family at the funeral home on Tuesday from 4:00 to 6:00 PM. Burial will take place in All Saint's Cemetery, North Haven. Contributions in Evelyn's memory can be made to Orchestra New England, PO Box 200123, New Haven, CT 06520 or given online at www.orchestranewengland.org/donate.