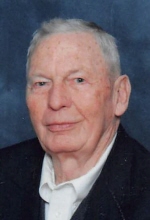 F. Stewart Stover, age 94, of North Haven, passed away on January 17, 2018. Stewart was the husband of Lois M. (Philippi) Stover. Born in New Haven on December 26, 1923; he grew up in Mt. Carmel, was the son of the late Egbert & Nellie L. (Jones) Stover, and brother of the late Alice E. Stover & E. Cornell Stover. Stewart is survived by his daughter, Carol Cody & her husband Eldon of Wallingford; his sons, Stewart Stover & his wife Suzanne of Rochester, NY and Dwight Stover of North Haven; grandchildren Emily Milazzo (Steven), Jonathan Stover (Andrea), Carolyn & Justin Cody, and his great-granddaughter Ella Milazzo. Stewart attended Oakwood Friends Prep School in Poughkeepsie, NY, graduating in 1942. He was a veteran of the US Army, Private 1st Class, wounded in WWII. After the war he attended Wittenburg University in Springfield, Ohio, graduating 1950. Stew worked at American Cyanamid in Wallingford and for the Town of Wallingford itself. He then worked at the Institute of Living in Hartford and retired from there in 1985. His professional career in Human Resources was a reflection of his personal concern for the well-being of others. Stew also was a board member involved in the formation of the Wallingford Community Daycare Center. He found joy in tending to his yard, playing the role of Santa to both the young and old, and especially in gatherings of family and friends for more than 60 years. Stewart was a member of the Masonic Day Spring Lodge #30 and North Haven VFW. He was an active member of Trinity Lutheran Church in New Haven, a former member of their Church Council, and taught Sunday School there. Friends may visit with his family at BEECHER & BENNETT FUNERAL HOME, 2300 Whitney Ave., Hamden on Friday, Jan. 26th from 5:00 to 7:00 PM, and may attend his Funeral Service on Saturday at 10:00 AM at Trinity Lutheran Church, 292 Orange St., New Haven. Burial with Military Honors will follow in Beaverdale Memorial Park, Hamden. Memorial contributions may be made to Oakwood Friends School or Trinity Lutheran Church.